WHAT THE BLEEP DO WE KNOW

WHAT THE BLEEP DO WE KNOW

What the BLEEP Do We Know — First released in theaters in 2004, WTBDWK!? went on to become one of the most successful documentaries of all time. Now distributed in over 30 countries, it has stunned audiences with its revolutionary cinematic blend of dramatic film, documentary, animation and comedy, while serving up a mind-jarring blend of Quantum Physics, spirituality, neurology and evolutionary thought.
Its success has spanned a massive extended DVD set ("Down the Rabbit Hole") a companion book, study groups, a resource outlet (BLEEP Store), and a host of transformational films that continue to appear around the world.

to appear around the world. 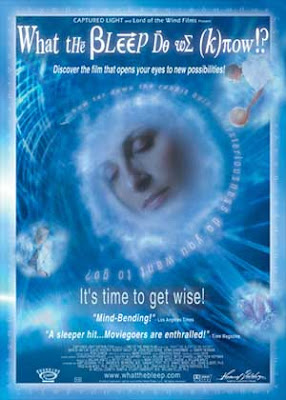 Originally released in February 2004 in one theater in Yelm, Washington, What the BLEEP Do We Know!? went on to become the fifth highest grossing documentary in the United States, with ticket sales of $12 Million.
Shunned by all movie distributors, the producers set about distributing and marketing the movie themselves in a “proof of concept” strategy to show theater owners there was indeed a market for spiritually oriented films that catered to audiences’ intelligence, not their lowest common denominator.
Although rejected by every major film festival (Sundance, Berlin, Toronto, Cannes, etc...), What the BLEEP did get entered in five smaller festivals, and won in every one. This, along with the grass roots, word-of-mouth campaign, kept the film in theaters for weeks and months on end. After five months of surprising box office numbers, the film attracted the attention of Samuel Goldwyn Films, and the producers entered into a distribution deal. The word-of-mouth buzz continued and the film showed real staying power (it played in one theater in Phoenix for 40+ consecutive weeks).
Following its theatrical run, FOX picked up the DVD rights and released What the BLEEP Do We Know!? March 15, 2005. The DVD immediately shot to the top of Amazon’s best selling list, and was named Amazon’s #1 DVD surprise of the year. To date it has sold over a million copies.
International distribution soon followed. Currently the film is now theatrically distributed in over 35 countries worldwide.
A host of further developments followed. A series of conferences was held featuring the speakers from the film, along with other notable leaders in the consciousness arena. BLEEP study groups spontaneously arose around the country, then the world, with people who did not want to let the ideas put forth in the film die, and who wanted to investigate and discuss them with like minded explorers. Bleep Study Groups continue to be formed around the world.
Two books followed, a soundtrack CD and finally the ultimate What the BLEEP DVD – Down the Rabbit Hole, with two extended versions of the film, along with hours of additional interviews.
Called by the media “the little film that could,” and “the critic proof movie,” What the BLEEP Do We Know!? is considered the first break-out film in the genre of Spiritual Cinema, and continues to find a new audience to this day. 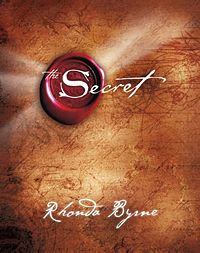 
The Secret reveals the most powerful law in the universe. The knowledge of this law has run like a golden thread through the lives and the teachings of all the prophets, seers, sages and saviors in the world's history, and through the lives of all truly great men and women. All that they have ever accomplished or attained has been done in full accordance with this most powerful law. Without exception, every human being has the ability to transform any weakness or suffering into strength, power, perfect peace, health, and abundance. Rhonda Byrne's discovery of The Secret began with a glimpse of the truth through a 100 year old book. She went back through centuries, tracing and uncovering a common truth that lay at the core of the most powerful philosophies, teachings and religions in the world. What Rhonda discovered is now captured in The Secret, a film that has been viewed by millions around the world. The Secret has also been released as an audio-book and printed book with more than six million copies in print. The Secret explains with simplicity the law that is governing all lives, and offers the knowledge of how to create - intentionally and effortlessly - a joyful life. This is the secret to everything - the secret to unlimited happiness, love, health and prosperity.This is the secret to life.


Ask
Know what you want and ask the universe for it.
This is where you need to get clear on what it is you want to create and visualise what you want as being as 'real' as possible.
Believe†
Feel and behave as if the object of your desire is on its way.
Focus your thoughts and your language on what it is you want to attract. You want to feel the feeling of really 'knowing' that what you desire is on its way to you, even if you have to trick yourself into believing it – do it.
Receive
Be open to receiving it.
Pay attention to your intuitive messages, synchronicities, signs from the Universe to help you along the way as assurance you are on the 'right' path. As you align yourself with the Universe and open yourself up to receiving, the very thing you are wanting to manifest will show up.

† In the earlier (first) edition, Esther Hicks listed the three steps as: "ask, answer, receive". In the first edition, she describes the step "answer" as "an answer to what you're asking ... what the universe does for you". (Hicks declined to continue with the project, mentioning contractual issues in a letter to friends

about love, death, spirituality, and the fragility of existence

--as told through the odyssey taken on by one man in his thousand-year struggle to save the woman he loves.

His epic journey begins in 16th-century Spain, where, as conquistador Tomas Creo, he commences his search for the 'Tree of Life', the legendary entity believed to grant eternal life to those who drink of its sap. As modern-day scientist Tommy Creo, he desperately struggles to find a cure for the cancer that is killing his beloved wife Isabel. Traveling through deep space as a 26th-century astronaut, Tom begins to grasp the mysteries of life that have consumed him for more than a century.

John Constantine has been to hell and back. Born with a gift he didn’t want, the ability to clearly recognize the half-breed angels and demons that walk the earth in human skin, Constantine (KEANU REEVES) was driven to take his own life to escape the tormenting clarity of his vision. But he failed. Resuscitated against his will, he found himself cast back into the land of the living. Now, marked as an attempted suicide with a temporary lease on life, he patrols the earthly border between heaven and hell, hoping in vain to earn his way to salvation by sending the devil’s foot soldiers back to the depths. But Constantine is no saint. Disillusioned by the world around him and at odds with the one beyond, he’s a hard-drinking, hard-living bitter hero who scorns the very idea of heroism. Constantine will fight to save your soul but he doesn’t want your admiration or your thanks – and certainly not your sympathy. All he wants is a reprieve. When a desperate but skeptical police detective (RACHEL WEISZ as Angela Dodson) enlists his help in solving the mysterious death of her beloved twin sister (also played by Weisz), their investigation takes them through the world of demons and angels that exists just beneath the landscape of contemporary Los Angeles. Caught in a catastrophic series of otherworldly events, the two become inextricably involved and seek to find their own peace at whatever cost.
WACTH TRAILER
http://www.youtube.com/watch?v=W9PKmPGOnBQ&feature=player_embedded

One Night with the King

Feel The Touch Of Destiny

"One Night With The King" chronicles the life of the young Jewish girl, Hadassah, who goes on to become the Biblical Esther .
A BEAUTIFULL LOVE HISTORY TO THINK...